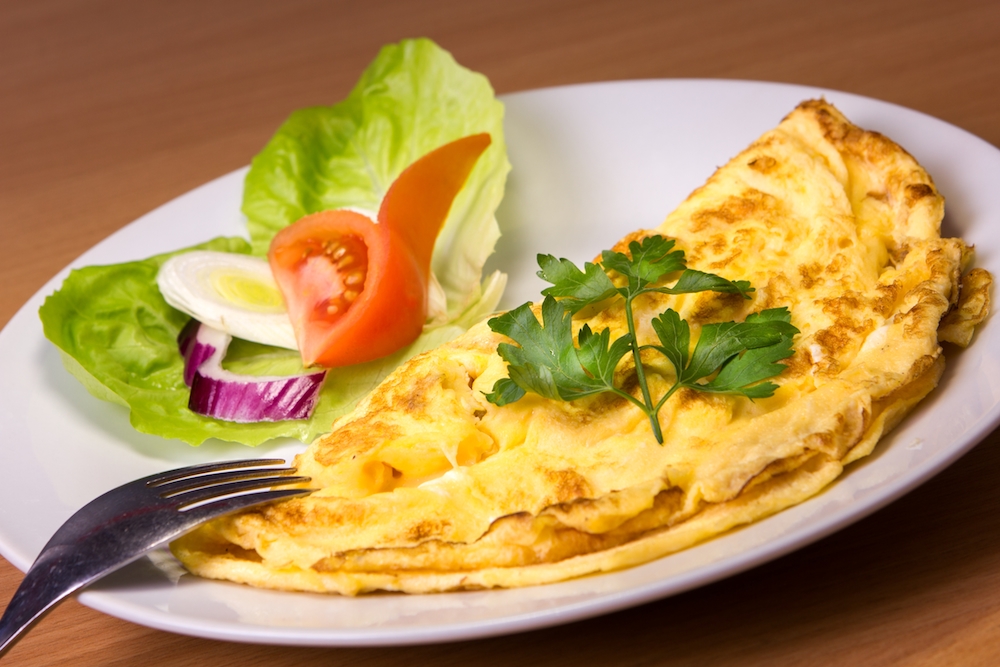 Eggs are high-quality protein and are reasonably priced. They lend themselves to an endless number of flavor combinations and are the basis of a large variety of wonderful dishes. The omelet (sometimes spelled ‘omelette’) is one such dish and this article will discuss basic techniques and tips for preparing an omelet.

So…what is an omelet? An omelet is a dish consisting of beaten eggs that are cooked until set and folded over, often around a filling of cheese and/or vegetables. They are remarkably easy to prepare and can provide a quick, yet impressive, evening meal to serve at the end of a busy day. Omelets may also be an elegant addition to any breakfast or brunch menu.

An individual omelet is generally prepared with 2 or 3 whole eggs, although they may be prepared from egg whites only. The list of suitable filling ingredients is quite lengthy and the combination of fillings to include in an omelet may be varied endlessly.

Filling ingredients other than cheese may be omitted to create a plain cheese omelet. As mentioned above, omelets are easy to make and anyone can master the technique. Merely adhere to the following steps and preparing the perfect omelet will become as simple as scrambling eggs.

Basic Technique for Preparing an Omelet…

1. Start by cracking 2 or 3 eggs into a bowl. Whisk the eggs with a wire whisk or fork until the yolks and whites are combined. One or two tablespoons of milk or water may be added to make the eggs fluffier. Add seasonings such as ground black pepper, favorite herbs, etc., to the egg mixture if desired. (Avoid adding salt as it will toughen the eggs.)

2. Coat an 8- or 10-inch nonstick omelet pan or skillet with cooking spray and heat it over medium heat. The smaller the pan, the easier it will be to manage the omelet, however, if using more than 3 eggs, a pan of greater size will be needed.

3. Once the pan is hot, pour in the egg mixture and gently swirl the pan to evenly distribute the eggs.

4. The eggs will begin to set after 20 or 30 seconds. Once the edges are set, gently push them toward the center and allow the uncooked liquid to flow into the exposed pan.

5. When the eggs are about 70% to 80% solid, add the filling ingredients on one side only in a half moon shape, leaving a little room around the circumference so that the fillings do not spill out. Do not add too much filling, or else it will be difficult to fold the omelet.

6. Once the eggs are cooked, run the tines of a fork around the edge of the omelet to make sure the egg layer has not stuck. Carefully run a spatula under the empty half of the omelet and gently fold it over the top of the full half.

7. Allow the omelet to remain in the pan for an additional 30 seconds. Take the spatula and run it under the omelet to make certain it has not stuck to the pan. Angle the pan over a serving plate and slide the omelet out of the pan onto the plate. Yields 1 serving.

How to Separate an Egg…

Many people, who wish to reduce fat and cholesterol in their diets, prepare omelets using egg whites only. Separating the egg white from the egg yolk is a simple skill to master. Just follow the step-by-step guide below:

2. Lightly crack the shell of one egg at its midpoint on the edge of a bowl. Glass, ceramic, or steel are preferred as a plastic bowl will not crack the egg shell as well.

3. With thumbs placed on either side of the crack, carefully open the shell into two halves, making sure that the egg yolk stays in one half of the shell.

4. Over the bowl, gently pour the egg yolk back and forth between the two shell halves, allowing the egg white to fall into the bowl while keeping the yolk in the shell.*

5. Once all the white is in the bowl, put the yolk into a covered container and refrigerate for later use in sauces, custards and cream fillings. Discard the shell or add to compost.

* Note: Be careful not to pierce the yolk on the rough edge of the egg shell, as this will cause the yolk to mix with the white. A small amount of yolk in the egg white is not a problem when making an omelet, but if the white is intended for use in making a meringue topping, even the tiniest amount of egg yolk mixed in with the white will prevent proper whipping.

<> It is best to not add salt to the eggs before cooking. Doing so will toughen the eggs.

<> Eggs come in different sizes. Most recipes assume the use of large eggs.

<> To reduce fat, omelets may be prepared using only the egg whites. Two egg whites are equivalent to one whole egg.

<> An egg white is easiest to beat at room temperature. If time allows, take the eggs out of the refrigerator about one-half hour before using.

<> The addition of a tablespoon or so of water or milk beaten into the eggs will result in a fluffier omelet. This, however, is strictly a matter of personal preference.

Many omelet recipes call for butter. Butter does not merely prevent the omelet from sticking to the pan, but it also enhances the flavor of the omelet. To avoid butter, an olive oil spread or nonstick cooking spray may be used.

When using a non-stick pan, the amount of butter may be reduced to half the amount specified in the recipe.

Chopped vegetables may be sauteed in a little butter or olive oil before adding them to the omelet.

If fresh mushrooms are used as an ingredient, they should always be sauteed before adding them to the omelet.

If your cooking skills have been limited to serving scrambled eggs, take a little time to step out and broaden your horizons by learning how to prepare an omelet. You will not regret it and your family and friends will be greatly impressed.

Omelets are quick and easy to make and with the broad range of filling ingredients, their versatility will allow you to introduce a great deal of variety to your meals.

Please consider including omelet preparation in your cooking repertoire. You may wish to follow omelet recipes verbatim at first, but with a little experience you will quickly become an expert omelet chef creating your very own variations of the perfect omelet.